Wine and chestnuts: the perfect combination

There is no sign that is more unequivocal of the arrival of autumn than chestnuts. The chestnut grows in both cool and sunny areas, so it is easy to find expanses of chestnut trees along the whole Mediterranean basin. The use of the chestnut is directly linked to the historical tradition that precedes it. Xenophon in Ancient Greece called it the “bread tree” as the fruit represented the main form of sustenance for the entire winter season. Harvested in November and stored during the colder months, chestnuts were conserved, cooked and eaten in many different ways. History tells us that they made their first appearance in November, at the turn of the “trasloco dei mezzadri”, that is the period in which the peasants left the plowing lands. As severance pay, they would have received the first products of the season: chestnuts and new wine.

The wine for chestnuts was therefore historically represented by a young wine, made from the first harvests: a light and easy wine that could bring a fresh and sparkling note to the fruit’s softness.
It goes without saying that pairing wine and chestnuts is a popular tradition, strongly linked to the territory and the origins of its place. From a modus vivendi to a modus operandi, wine accompanied fruits not to enhance or modify their flavor but simply because they represented seasonal products and therefore consumed together. With the passage of time, food has developed the function of satisfaction and pleasure and no longer just sustenance. Consequently, our palates have improved and developed an increasingly complex taste capacity.

And this is how the combinations of food and wine were born, which become infinitely interesting when we focus on chestnuts. The different ways to cook chestnuts have multiplied and each gives us a different dimension of this multifaceted fruit, which can be sweet if boiled and cooked gently or tannic if eaten roasted with its skin. It goes without saying that a roasted chestnut requires a red wine, possibly in a vintage that allows immediate drinking such as Sangiovese, Brunello or Valpolicella. If the chestnut is treated delicately, letting it express its sweetness and mellowness, it’s best to pair with something soft and fresh: the smooth and velvety texture goes well with simple red wines, served at room temperature that help our palate to sweep away residues and the amalgam given by the fruit. The chestnut has a delicate taste that must not and cannot be dominated by the structure of the wine; it is therefore discouraged to pair with wines that feature strong spice aromas, or wines in which the scent of wood is very predominant, as they may cover the structure of the chestnut. Instead, it is preferable to pair chestnuts with wines produced in steel containers which are fresh and sweet.

How to choose the wine to pair with chestnuts?

Much depends on the preparation and their use. A pan of roasted chestnuts is very different from a puree for roasts or a sauce for risottos, soups or fresh pasta. In this case, the taste of the chestnut is enhanced, the sweetness prevails over the pasty composition and the wine must be able to balance the flavors well. Wines with a consistent body are ideal to withstand the structure of the dish. Chestnuts go well with varieties such as Chianti, or, by changing the area and color, a Pinot Grigio. The wine must have a well-defined structure which reflects the same characteristics of the chestnut in order to create harmony and balance on the palate, leaving the sweet and aromatic finish on the finish.
Of no less importance are the sweet preparations based on chestnuts, first of all the Castagnaccio, a cake typical of the Tuscan tradition. Equally, the Mont Blanc made with fruit puree, in which the sugary presence leads to an obligatory choice – the combination with sweet wines. In these cases, a sugary but decidedly structured wine that is characterized by the same peculiarities should be chosen, such as Vin Santo Villa da Vinci. 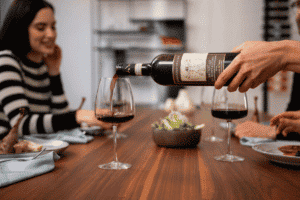 The perfect combinations for the Easter menu

How to pairing polentaand wine

1 February 2021
Read
Return to the Journal