The inventions of Leonardo da Vinci

The word Leonardo immediately reminds one of the word Genius, because it is the adjective that best summarizes his multifaceted talents and his attitude of being a man projected into the future: so much so that even today he is considered an icon and a symbol of innovation, creativity and refined intelligence.
Leonardo is the man of the Renaissance, he embodies that precise historical period of cultural, artistic and scientific revolution where man was a measure of everything, with a renewed attention that places him at the center of every discipline.
Beyond the results achieved, Leonardo’s extraordinary contemporaneity lies in his approach and method, his inexhaustible curiosity, and in the fundamental contribution that led to the culture and development of mankind.

For this reason, his is considered a “useful” creativity, because all the inventions of Leonardo da Vinci always aimed to improve the life of men. The Genius of Vinci noted every reasoning, sketch and drawing in his notebooks, and thanks to this we can retrace his formidable intuitions, follow his thoughts and his investigations that reason with science and nature.

Just as genius signifies the combination of vision and pragmatism, Leonardo da Vinci combines works of art and inventions. Among the drawings and inventions of Leonardo da Vinci, all written in his notebooks, there are submarines, airplanes, cars, tanks, but also fans, screws, guitars, cranes and calculators, parachutes and life jackets: objects and insights that investigate every aspect of life.

Studies on flight and parachute

Passionate about nature, the study on the flight of birds lead him to imagine a flying machine that would allow man to reach the skeis. Among Leonardo da Vinci’s inventions, those on flight are certainly the most surprising, in particular the helicopter. With his aerial screw of 1489, Leonardo had sensed the concept of the modern propeller. His flying machine would have been manually operated by four men and then hovered in the air. In the Codex Atlanticus there is also the drawing of a man hanging from a pyramid-shaped contraption capable of launching from any height without hurting himself.

In addition to the air, Leonardo wanted men to be able to go underwater too, defying nature. In the Codex Atlanticus there is also the description of diving apparatus, with a complete suit and mask with goggles, and a mechanism for sending air from a bell on the surface connected by pipes resistant to water pressure.

Working as an engineer and architect on numerous defensive systems for his powerful clients, Leonardo also imagined war machines, such as a mechanical tank capable of moving and shooting in any direction, maneuvered by eight men hidden inside. On paper, brilliant and perfect, but with a small defect in movement. Not bad – it’s the intuition that matters.

Inventor, painter, scientist, Leonardo was also an expert on wines (link to the page “Genius of wine”). It is evidenced in his notes and drawings and in particular from a letter sent to his farmer with precise agronomic and oenological instructions on how to obtain a flawless wine. It is thanks to this letter and to Leonardo’s love for wine, that Cantine Leonardo da Vinci is committed to making wines that the genius would be proud of. 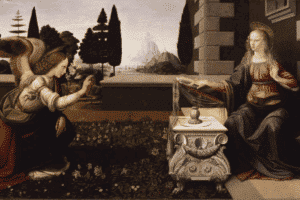